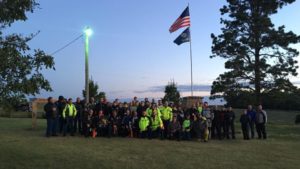 On June 24, 2017, eighty-seven riders — 80 motorcycles plus 7 co-riders — participated in the third annual Smackdab Summer Solstice Run. This was by far the biggest and most successful Smackdab yet! The great residents of Smith Center, Kansas gave us all a great send-off with homemade cinnamon rolls, coffee, and juice. Rider also got plenty of trail mix for the road, courtesy of the Lebanon, Kansas Hub Club. Despite slightly cool temperatures, some strong cross winds, and light rain showers here and there along the route, riders told us they had a great time. Unfortunately, we also had one DNF this year, due to a charging system failure. (Come back and give it another go next year, Tyler!)
This year’s much larger crowd of riders showed where some minor improvements to the event can be made, and we’ll be tweaking the ride slightly next year in light of the great suggestions riders and local residents gave us.