Based on feedback from the members of the Smackdab Facebook group, this design has been adopted for a 3″x4″ oval decal. These vinyl decals will be suitable for use indoors or out. They may or may not arrive prior to this year’s run, but riders will have the option of adding a set of 3 for an additional $2 when they mail in for their finisher’s patch.

Darylanna Durkee of the Rugby Convention & Visitors Bureau has reserved the fairgrounds in Rugby for Saturday, June 22nd for those who’d like to camp. RV’s, campers, or tents are allowed. There is no electricity and vehicles must be self contained, but Rugby does have a dump station in town. There are public restrooms & showers at the fairgrounds. There is no charge to use the camping space, but riders are asked to make a donation at our city hall.

The Prairie Village Museum is also a Harvest Host (you can camp for free if you pay admission to the museum) & will be having their 7th Annual Rhubarb Festival Sunday, June 23rd! Please reach out to Darylanna with any additional questions at (701) 776-5846 or at rugbychamber@gondtc.com.

Riders wanting to register for the June 22, 2019 Smackdab Summer Solstice Run can now do so at http://smackdab281.org/registration. This year, the registration form has been expanded. This will enhance our record keeping, streamline the sign-up process the morning of the ride, and provide more useful data to our partners in Smith Center, Lebanon, and Rugby.

With four days to go until Smackdab 2018, the weather forecast for this weekend looks fairly promising. At this point, no severe weather is expected along the route. The extremely high winds riders had to endure last year also seem unlikely. While rain is not predicted for the departure, it is likely that most riders will encounter at least some light rain during the ride northward, and perhaps some localized thundershowers. (But if you’re going to cross the plains in June, you should always have rain gear with you, and expect to use it at some point.)

The forecast could change drastically over the next couple of days. We will continue to watch the weather as the weekend approaches.

The Smith Center Chamber of Commerce and American Legion Riders invite all SmackDab riders to an evening in the park on Friday, June 22 2018 — the eve of the ride. The Legion Riders will be grilling hamburgers (plus all of the goodies to go with that) and a couple of local performers will provide some music and down-home entertainment while you eat. It will start around 5:00 pm, so that riders will be able to eat and relax a little, yet still hit the sack early.

If you like to attend, RSVP by contacting Diane Peterson at the Smith Center CoC office by calling 785-282-3895 or emailing scchamber@smithcenterks.com

Due to the unexpected increase in early registrations for this year’s run, the qualifications for the discount on patches has been revised. This year, we must cap the half-price patch eligibility to the FIRST 100 RIDERS only. The Smith Center Chamber of Commerce subsidizes the purchase of these patches and their budget is not unlimited. To date (February 27, 2018), 71 riders and co-riders have registered.

Also, we’re now specifying the discount Chamber of Commerce will chip-in as a set $5 per patch. For this year, that’s still the same “half price” as in the past, but I have been cautioned by our supplier that the cost of patches will be going up. This change in language insulates the CoC’s contribution from future increases in the cost of patches.

The US Center Foundation confirmed that camping WILL be available in Lebanon again this year. Harmony Park is located in the center of town, at the corner of Main Street and Kansas Ave. Bathrooms will available, but no showers. For those of you who don’t want to have to get up any earlier and ride any more miles than necessary that day, this is about as close to the departure point as you can spend the night.

Camping in Rugby on Saturday night is available at the Pierce County Fairgrounds The Rugby Convention and Visitors Bureau would like a count of how many will be camping at the site, so riders who are interested in camping at the fairground; a note to info@smackdab281.org the organizer or a post in our Facebook group would be appreciated. Camping is also available within walking distance of the monument at the Oakwood Inn & Campground on US Hwy 2. 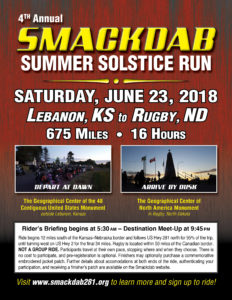 A letter-size (8-1/2″ x 11″) flyer/handbill promoting this year’s Smackdab Run is now available to download and distribute. It is available in 2 file formats:
JPEG image (1.5 MB): Smackdab2018-poster.jpg

LEBANON, KS — Saturday, June 23, 2018 will mark the fourth annual Smackdab Summer Solstice Run, a one-day, 675-mile motorcycle tour held between dawn and dusk on the Saturday closest to the summer solstice. The ride starts between dawn and sunrise at the monument marking the Geographic Center of the 48 Contiguous States, just outside Lebanon, Kansas. Riders head north toward a similar monument marking the Geographic Center of North America in Rugby, North Dakota, and must arrive by dusk. The event is not a group ride. Participants ride individually, travel at their own pace, and stop whenever and wherever they like. There is no registration fee; the only expense is the optional purchase of an embroidered patch, which is offered to verified finishers at cost.

The Smackdab Summer Solstice Run is the brainchild of Peter Zilliox, a motorcyclist from Kansas City. “It’s a very grass-roots, unstructured thing,” Zilliox said. “I originally conceived of the trip as something to do with my wife and a riding buddy of ours. The three of us had previously explored a lot of rural Kansas by motorcycle, and I was looking for a new adventure. But it was a quirky enough idea that I posted an invitation on an online riders’ forum, and a dozen others joined us for that first run in 2015. So, I had some finisher’s patches made up for everyone. Several prospective riders who couldn’t make the inaugural trip expressed an interest in continuing it as an annual event. The next year, a totally new crop of riders completed the trip, and then participation really skyrocketed in 2017.”

A total of 87 riders—eighty motorcyclists plus seven co-riders—completed the most recent Smackdab Summer Solstice Run last June. This year, participation is expected to be even greater. “Most of our growth has been through word-of-mouth and social media,” Zilliox said. “I’m amazed how many people have expressed interest in this year’s event. Online registration went live on January 10th, and less than a month later we already have more than 30 riders signed up.”

The ride starts twelve miles south of the Kansas–Nebraska border, just off US Highway 281. The solstice allows over sixteen hours to ride the 675 miles across Nebraska and South Dakota, then through most of North Dakota. The route follows Highway 281 north for 95 percent of the trip, until it turns west on US Highway 2 for the final 34 miles into Rugby, North Dakota, which is within 50 miles of the Canadian border. Just before dusk, finishers gather at the monument in Rugby to swap stories of the road and share a great sense of accomplishment.

“All types of bikes make the ride, even as small as 250 cc’s,” Zilliox said. “From Harley dressers to adventure bikes to trikes—any motorcyclist is welcome to show up and ride. It’s just an excuse to spend a day exploring some new territory on a bike, meet other bikers, and have a bit of adventure.”

For more information and photos, or to register, visit the Smackdab website at http://smackdab281.org

This press release is available for distribution as a PDF file: Smackdab-Press-Rel_2018-02.pdf

The past couple of years, a small number of participants have asked me how they can be counted as a finisher without being present at the sundown meet-up in Rugby. While it’s my firm opinion that the camaraderie of starting and finishing the ride as a group is an integral part of the Smackdab experience, I understand that some folks simply can’t hang around and spend the night in Rugby. Therefore, for 2018 a new alternative validation method is available for those who cannot be at monument when the sun sets. See the Riding Smackdab page for all the details.